There are three materials commonly used in molding refractors for outdoor luminaires. Two are thermoplastic materials, acrylic and polycarbonate, and the third is borosilicate glass.

There is a basic difference between the glass and the plastic materials. Acrylic and polycarbonate are both organic, petroleum based compounds and will eventually break down when exposed to the heat and ultraviolet radiation from a lamp or the outdoor environment. The glass, on the other hand, is an inorganic material that will not deteriorate in normal use.

When evaluating the suitability of a material for this application, there are several characteristics that must be considered. They are as follows:

To obtain a true evaluation of these materials, their performance must be evaluated not only when new, but also after a reasonable exposure to their normal operating environment.

While in samples of equal thickness both acrylic and polycarbonate have impact strengths, considerably higher than that of glass, there are two additional factors that must be considered. Typically, a borosilicate glass refractor is molded with a thickness that is much greater than that of the plastic equivalents.

Second, the impact strength of both plastic materials will deteriorate to a certain degree with age and exposure to ultraviolet radiation, heat and the normal outdoor environment. This is particularly true of polycarbonate, which can lose all of its basic material impact strength advantage in as little as nine months.

he amount of degradation will, of course, depend on the amount of ultraviolet exposure and the material operating temperature, but even with ultraviolet stabilizing additives, the impact strength of a plastic refractor will drop with time, polycarbonate a great deal, and acrylic somewhat. 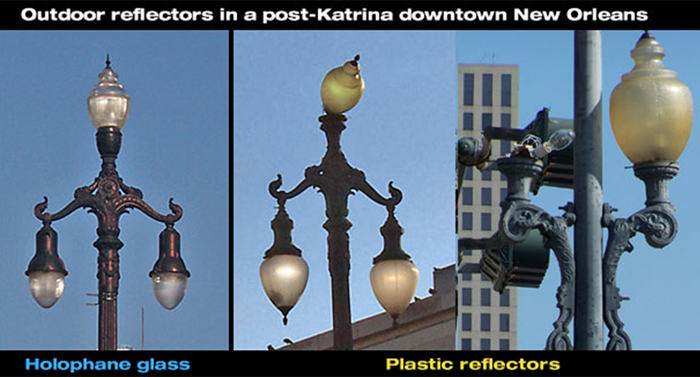 When a material loses its clarity, it can no longer function as a refractor. If the optical medium becomes cloudy, the light is scattered and the prisms can no longer function to control the light. Borosilicate glass is crystal clear and remains so indefinitely. Acrylic develops a slight haze with time, while polycarbonate does so to a considerable degree. After three years of outdoor exposure, without additional heat and ultraviolet radiation from a light source, one study showed nearly 20% haze in a polycarbonate sample.

The surface quality of plastic refractors can deteriorate with age and exposure to the outdoor environment. The loss of luster and crazing, or the development of tiny surface cracks, can greatly depreciate the appearance of plastic refractors and adversely affect their ability to control light. The surface of a borosilicate glass refractor will not deteriorate with exposure to a normal outdoor environment and is not affected by lamp heat or ultraviolet radiation from the sun or the lamp.

Glass will not discolor due to exposure to heat, ultraviolet light or normal environmental conditions. Both acrylic and polycarbonate will discolor when exposed to either heat or ultraviolet. An A.S.T.M. yellowness index of 22 is considered to be "noticeable," and 35 is considered to be "prominent." Polycarbonate refractors have been known to reach the "prominent" stage in as little as nine months' use in an H.I.D. luminaire, although three to five years is more common.

In the final analysis, the inorganic borosilicate will retain its desirable characteristics indefinitely, while plastic will deteriorate in normal use and require replacement... Acrylic after a reasonable length of time, and polycarbonate much sooner in most lighting applications. 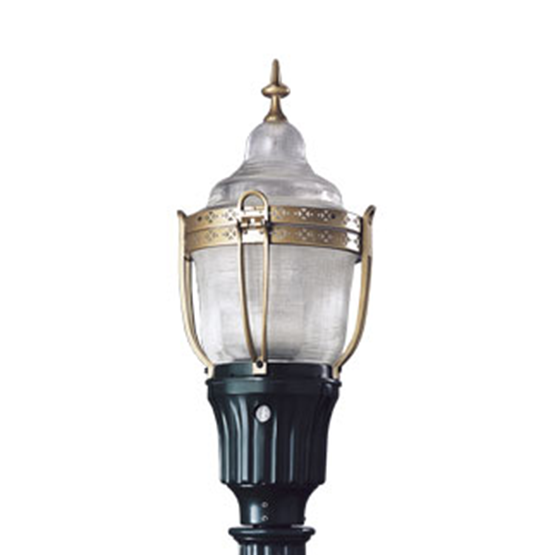 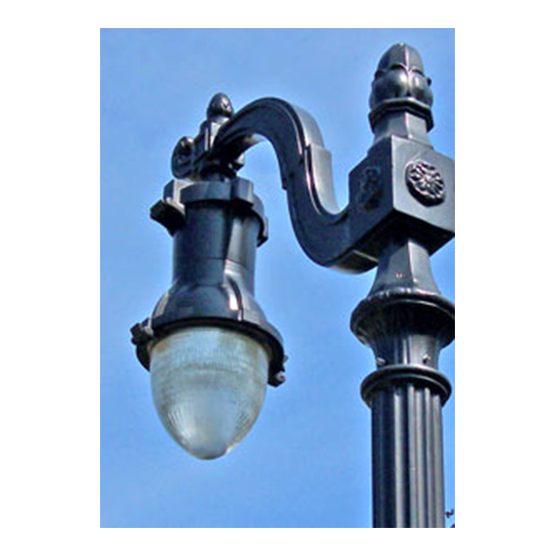